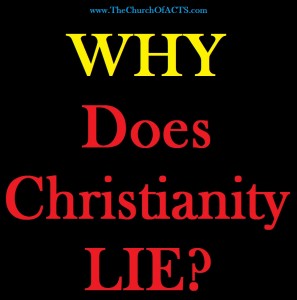 God’s Son does not LIE but WHY does Christianity say he did lie?

God does not LIE but WHY does Christianity say He does lie?

God’s Son said he would never change YHVH God his Father’s LAW but Christianity says he did change it:

Matthew 5:17  “Do not think that I came to destroy THE LAW or the Prophets. I did not come to destroy but to fully teach.

God’s Son said the way to eternal life and salvation was through keeping THE LAW of His Father but Christianity says that changed:

Matthew 19:17  “if you want to enter into life, keep the commandments.”

YHVH God the Father said He would never change but Christianity says He did:

The Holy Spirit is supposed to guide us into all Truth but Christianity says Truth CHANGED:

John 16:13  However, when He, the Spirit of truth, has come, He will guide you into all Truth; for He will not speak on His own authority, but whatever He hears He will speak; and He will tell you things to come.

So, if THE LAW is Truth then isn’t that what the Holy Spirit is supposed to guide us into…?

And, if like Christianity says you get covered in righteousness for merely believing in Jesus then WHY would you need the Holy Spirit to guide you into all Truth?  Don’t you have it already?

And if you are sitting in a church where they tell you God changed and His Son changed and you do not have to keep the Sabbath and THE LAW don’t you think maybe you had better learn the Truth of these things before it is too late?

Cause, if you cannot answer these questions, then you have been deceived into believing something you do not understand.

2 Corinthians 11:14-15  And no wonder! For Satan himself transforms himself into an angel of light. 15 Therefore it is no great thing if his ministers also transform themselves into ministers of righteousness, whose end will be according to their works.

If you cannot answer these questions, you had better start reading all the Bible and start studying because your eternal soul depends on it!!!