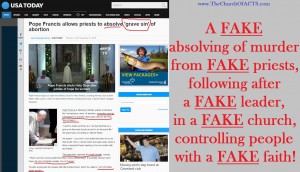 No man can produce forgiveness for an intentional sin.

No one can forgive sins committed by someone else against someone else. Nothing like the Catholic confessional exists in the Bible!

The entire confessional travesty of the Catholic church is a FRAUD.

Only YHVH God can choose to forgive an intentional sin and the scriptures show He does not do it very often…  Intentional sin falls outside the normal repentance, sacrifice, ordinance system of THE LAW.  It is akin to repenting and throwing oneself on the mercy of the Court of THE LAW of YHVH God the Father and hoping, mourning, praying, fasting whatever it takes to show YHVH God true, deep repentance and the commitment to go and sin no more.

THE LAW of YHVH God the Father has NO clauses for the forgiveness of intentional sin.

Abortion is an intentional sin.  It is premeditated, it is murder, it is planned long before the actual act takes place.

The Catholic church did away with YHVH God’s 7th Day Sabbath and ultimately all His LAW and made something they called Christianity the state religion of the Roman Empire in about 325 AD.  That thing called Christianity is NOT the faith we read about in the Bible.

The pope created a “special jubilee year” for forgiveness.

There is no such thing in the Bible as THE LAW is the only method of forgiveness written.

The Catholic church does something called a jubilee every 25 years.

There is no such thing in the Bible as THE LAW says the Jubilee is every 49 years.

There is no such thing in the Bible as all who KEEP YHVH God the Father’s LAW are Saints!

The pope opposes the death penalty and says true punishment must have hope.

There is no such hope in the Bible for those YHVH the Father’s LAW says are to be put to death.

The pope says “If a penalty doesn’t have hope, it’s not a Christian penalty, it’s not human.”

The pope is partially right YHVH God the Father is not human and His written LAW is the Way, the Truth, and the Life we are supposed to live.

The pope is partially right, THE LAW of YHVH God the Father is not a “Christian” penalty.

YHVH God the Father does not recognize Christianity as a valid religion because it rejects His LAW.

YHVH God the Father does not recognize Christianity as a valid religion because it rejects His Son in whom He put His LAW/Word so that we would hear YHVH speaking through His Son and obey His LAW and get back on the salvation path of His LAW.  Deuteronomy 18:15-19

The Catholic church is an abomination is pretty much every sense of the word since everything done through it is in direct disobedience to YHVH God the Father’s LAW.

Do they sometimes do “good” things?  Yes, but not for the glory of YHVH God and His Living Torah/Son – they do those things in obedience to the false religion they have created and founded not on YHVH God the Father’s LAW but upon false man made laws, rules, and regulations that do not lead to salvation.

At The Judgment, the Bible tells us every man must stand alone and give account of himself to the Righteous Judge.

The core problem for Christianity is The Judgment is wholly and completely based upon YHVH God the Father’s LAW not some false man made dreamed up imaginations of false believers like Constantine who wanted control over the entire earth and continued to practice his paganism and continued to murder, even his own family…

Hebrews 9:27  And as it is appointed for men to die once, but after this The Judgment.

Matthew 12:36  But I say to you that for every idle word men may speak, they will give account of it in the day of judgment.

Romans 14:12  So then each of us shall give account of himself to God.

Hebrews 4:13  And there is no creature hidden from His sight, but all things are naked and open to the eyes of Him to whom we must give account.

1 Peter 4:5  They will give an account to Him who is ready to judge the living and the dead.

In the 7th Millennium YHVH God the Father’s LAW the THE LAW of all the world:

Ezekiel 44:24  In controversy they shall stand as judges, and judge it according to My judgments. They shall keep My laws and My statutes in all My appointed meetings, and they shall hallow My Sabbaths.

Daniel 7:9-10  I watched till thrones were put in place,
And the Ancient of Days was seated;
His garment was white as snow,
And the hair of His head was like pure wool.
His throne was a fiery flame,
Its wheels a burning fire;
10 A fiery stream issued
And came forth from before Him.
A thousand thousands ministered to Him;
Ten thousand times ten thousand stood before Him.
The court was seated,
And the books were opened.

Revelation 20:11-15  Then I saw a great white throne and Him who sat on it, from whose face the earth and the heaven fled away. And there was found no place for them. 12 And I saw the dead, small and great, standing before God, and books were opened. And another book was opened, which is the Book of Life. And the dead were judged according to their works, by the things which were written in the books. 13 The sea gave up the dead who were in it, and Death and Hades delivered up the dead who were in them. And they were judged, each one according to his works. 14 Then Death and Hades were cast into the lake of fire. This is the second death. 15 And anyone not found written in the Book of Life was cast into the lake of fire.

The Catholic church is the Harlot of Revelation.  So are all churches and religions that practice contrary to YHVH God the Father’s LAW.  This includes almost all of Christianity, Judaism, Islam, Hinduism, Buddhism, and many others.

It is not yet too late to repent, leave false churches, and keep YHVH God the Father’s Law but the time is getting very short:

The really sad thing is very, very few leaders in churches that know these Catholic things are false are speaking out against them in public these days…