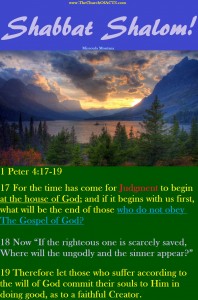 Peter is quoting from the Scriptures in Proverbs 11:31 and that is King David reflecting on the true Righteous people who keep YHVH God’s LAW known as Torah which is the Gospel of YHVH God.

Modern day Christians are not the Righteous unless they keep YHVH’s Sabbath and hold fast His Covenant LAW: Isaiah 56

What has happened in the modern days for almost 2,000 years beginning not long after Messiah died was evil men came in and changed things and twisted the true meaning of Scriptures.  Paul talks about these wolves in Acts 20 and other places.

This began mostly with the establishment of the so-called “new testament”.

Bible translators working for the false Roman Catholic Church began translating into Latin but they translated according to their theology in Rome not according to the biblical standards found in the Scriptures themselves.

During the entire life of Messiah and for many decades after his death, the only Scriptures anyone had were Genesis thru Malachi.  In fact, ALL references to “the scriptures” in the so-called “new testament” are in reference to Genesis thru Malachi.  There was no “new testament” until the late 4th century and even then few people ever had a copy or heard a copy read.

In fact, quotations from Genesis thru Malachi make up the majority of the “new testament”.

And all the TRUTH in the “new testament” is based on Genesis thru Malachi.

Evil theologians created a false religion based around royalty alone and based it in Rome, malevolently moved the observance of Sabbath to Sunday, made illegal the keeping of “jewish” Feasts of YHVH, and stripped the attributes of YHVH God right in front of the people’s eyes and forced the people into religious slavery.  Most of the people who did not obey Rome died.

Make no mistake about it, the church of Rome is the most EVIL deceptive theological concoction in the history of man.

Those reformers who broke away in the early 16th century, however, kept many of the same FALSE doctrines as the church they called ANTICHRIST in Rome.

Only small, covert groups of believers continued to maintain true Sabbath observance, keep YHVH God the Father’s Feasts, and keep His LAW of the Covenant.

And things are pretty much the same way to this very day!

Despite a couple hundred years of virtual religious freedom, Christians still do not love YHVH God and His Son enough to do what His Son said to DO:

Matthew 6:33 “But seek first the kingdom of God and His Righteousness”

To this very day, Christians ignore that Commandment like the PLAGUE!

Christian Theology had kept Christians as religious slaves for more than 1,700 years now.

Christian Theology keeps Christians from having a true relationship with the Living God and His Son and instead feeds the people a false relationship based on mere faith (James 2:19) after they are born again or not having never been born again at all.

It does not matter to Christian Theologians that the very WORDS of their “savior” says this:

Matthew 10:22  And you will be hated by all for My name’s sake. But he who endures to the end will be saved.

How many lies can Christian Theologians tell?

Answer: How much Truth exists?

Revelation 22:14-15  Blessed are those who do YHVH’s (His Father’s) commandments, that they may have the right to the tree of life, and may enter through the gates into the city. 15 But outside are dogs and sorcerers and sexually immoral and murderers and idolaters, and whoever loves and practices a lie.

THAT is what TRUE BELIEVING really IS!!!