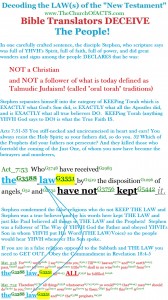 Modern Christianity defines itself as not having to keep YHVH God the Father Creator of the Universe’s LAW.

They are opposed to THE LAW as Bible translators continue to this very day to crank out Bible translations which change the original manuscripts of the Greek language (and Hebrew language as well) and deceive the people according to their false theologies by turning the people against their Creator and His Son.

Stephen in Acts 7 declares that he keeps THE LAW.

Stephen condemns those practicing Jews for NOT keeping THE LAW.

Stephen has separated himself from all people who do not keep THE LAW.

And those people kill Stephen because of this!

And they are still killing Stephen to this very day and cheating the people out of understanding the faith he lived.

Stephen lived the same faith all the Righteous from Genesis to Malachi lived.

Stephen lived the same faith Zecharias and Elizabeth did in Luke 1:5-6

Stephen lived the same faith all the Apostles, disciples, and true believers everywhere have lived for about 6,000 years now.

The True Faith is DOing whatever YHVH God says to DO!

The True Faith is obedience to whatever YHVH God says to DO!

YHVH God created prophets and told them all to GO and they all went…  And many of them were killed.

YHVH God told Moses He would create a prophet like Moses and put YHVH’s WORDs into that prophets mouth so when the prophet spoke they would hear YHVH’s Voice/Commandments/WORD/LAW and know how to live according to YHVH’s WORD spoken through that prophet’s mouth – Deuteronomy 18:15-19

YHVH God had done that very same thing, putting His WORD into the mouths of all His Prophets.

YHVH God created that prophet as Yeshua (Yeshua) and put YHVH’s TORAH into Yeshua perfectly so that he was the perfect example to the people of how to live.

Yeshua was murdered on a cross and YHVH was satisfied Yeshua’s perfect unblemished, unspotted life qualified for Yeshua to become the substitutionary sacrifice into THE LAW so all people all over the world would have His Son’s sacrifice to apply within THE LAW to offer for their sins according to THE LAW.

That is the True Faith!

The True Faith is revealed in John 15:14 as YHVH God speaks through His Son’s mouth:

John 15:14  You are My friends if you do whatever I command you.

John 15:14 is YHVH God the Father Himself speaking through the mouth of His Son making it crystal clear what the True Faith IS.

True Faith IS, was, and always shall be DOing whatever YHVH God the Father says to DO!

The false religions of Christianity, Judaism, Islam, and many others try to take a few scriptures here and there and make people believe they have the true faith when all the time they are nothing but robbers, thieves, and liars who are knowingly and unknowingly being controlled by Satan into believing they can skate around what God has said.

Those false religions sound just like the disobedience in the Garden of Eden, don’t they?

Get out of them.  They are the Harlot of Revelation (anything claiming God but opposed to His written Commandments) Revelation 18:4-5

PS…  ALL “the law” posts can be viewed and more importantly shared in witnessing here: https://thechurchofacts.com/share-the-law-posts/ 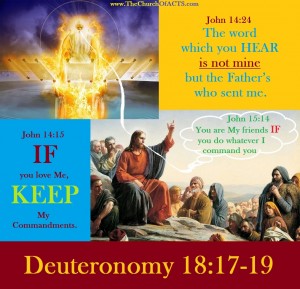